On Dec. 15, 2021, we installed our 2022 DCAR leadership team, with Thomas Daley as our 2022 president. Thank you to everyone who attended our Annual Meeting & Installation and helped make it a success!

We are proud to present your 2022 leadership team:

Thank you to 2021 President Frederic Bates and the entire 2021 board for your contributions. We are confident 2022 will be another year of successes!

Do you have a passion for public policy? Or a desire to work with local policymakers to consider measures that make a difference in your community? Now is your chance to apply to serve on the District of Columbia Association of REALTORS®’ Public Policy Committee!

The Public Policy Committee works with the DCAR Government Affairs team to analyze pending and proposed legislation in D.C. It establishes DCAR’s official stance on a variety of issues and ensures the association’s advocacy presence in the District.

Applicants should have an understanding of local legislation and politics. Selected committee members will be expected to actively participate in DCAR events, initiatives and activities at the Wilson Building.

The deadline to submit your application is Thursday, December 9. Additional information on the committee and committee requirements can be found on the application.

Congratulations to our DCAR members appointed to 2022 NAR committees!

We are proud to share the list of DCAR members who have been appointed to NAR committees for 2022. Congratulations to all of you!

Do you aspire to be a national real estate leader? You can start by getting involved in your state REALTOR® association… and now is the perfect time. Starting Nov. 11, you can apply to serve on DCAR’s Public Policy Committee! It’s a great way to hone your leadership skills and increase your knowledge of legislative issues and association functions. In doing so, you set a course for further involvement in DCAR and opportunities to serve as a state-level director, officer or in a role at the national level. 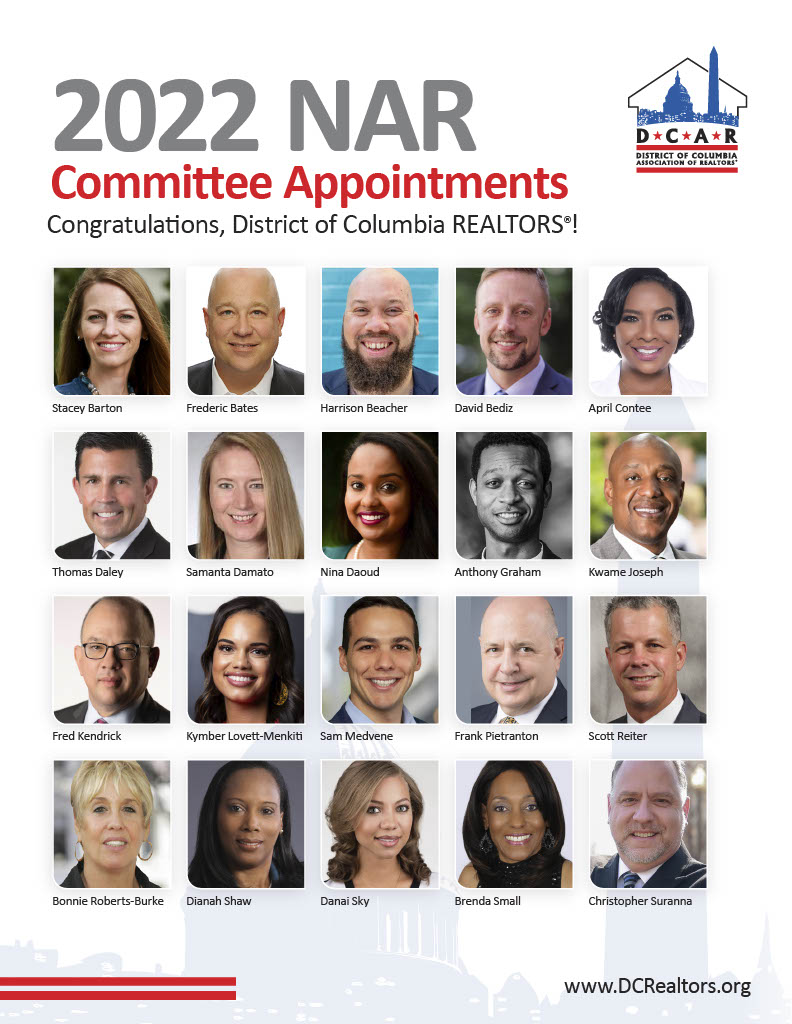 We are honored to announce the candidates for our 2022 DCAR Board of Directors! In compliance with Article IX, Section 1 of our District of Columbia Association of REALTORS® (DCAR) bylaws, the DCAR Nominating Committee has nominated the following individuals to offices on the 2022 board, as indicated, subject to their election by the membership.

The election will be held during our DCAR Annual Meeting and Installation on Wednesday, December 15 at 6 p.m. Registration details are coming soon.

SLATE OF OFFICERS AS PRESENTED BY THE NOMINATING COMMITTEE

(three to be elected)

Presidential appointees (2): To be determined

Additional candidates for these offices can be nominated by a petition signed by at least 5% of DCAR’s REALTOR® members and emailed to Scott Reiter, sreiter@dcrealtors.org. Petitions must be received by Friday, November 26, 2021.

Thank you in advance for your participation in our upcoming election!

Are you looking to be more successful? In this exclusive virtual presentation, New York Times bestselling author Shawn Achor will discuss his research about how happiness, optimism and social connection are the fuel that yield higher success rates. Learn how to incorporate Shawn’s formula for success to unlock your potential and create a more positive and rewarding environment in your personal and professional life. Join us on Tuesday, Sept. 28, 5:30 – 6:30 p.m., for this free event!

After spending twelve years at Harvard University, Shawn Achor has become one of the world’s leading experts on the connection between happiness and success. His research on mindset made the cover of Harvard Business Review, his TED talk is one of the most popular of all time with over 13 million views, and his lecture airing on PBS has been seen by millions. Shawn has lectured or worked with over a third of the Fortune 100 companies, as well as the NFL, the NBA, the Pentagon and the White House. Shawn is the author of New York Times best-selling books The Happiness Advantage (2010) and Big Potential (2018). He has now lectured in more than 50 countries speaking to CEOs in China, doctors in Dubai, schoolchildren in South Africa, and farmers in Zimbabwe. His Happiness Advantage training is one of the largest and most successful positive psychology corporate training programs in the world.

Shawn’s research has been published in the top psychology journal for work he did at UBS in partnership with Yale University to transform how stress impacts the body, and he recently did a two-hour interview with Oprah at her house to discuss his mission to bring positive psychology to the world.

D.C. officials announced last week that more than $143 million, or 70 percent, of the $200 million federal rent relief money had been dispersed to D.C. residents. Under federal guidelines, D.C. was at risk of losing the funds if enough weren’t distributed before the end of September.

The results are a solid win for DCAR members. Since StayDC’s rollout, DCAR has promoted the valuable resource available to small housing providers and tenants. DCAR members have participated in the program and helped to educate their fellow community members about the application process. DCAR’s outreach, along with that of city officials and other organizations, has ensured much-needed funds are reaching those in the District who need help and ensured that we don’t lose pivotal federal dollars in D.C.

Information about D.C.’s eviction moratorium, including a timeline of when the rollbacks will occur, is available on DCAR’s Small Housing Provider page.

If you are a small housing provider and need help making ends meet, or if you know someone who’s behind on rent and utility bills, help is available through the STAYDC program. Call 833-4-STAYDC (78-2932) or visit stay.dc.gov.

Are you looking for an opportunity to leverage your leadership abilities and make a positive impact on the REALTOR® community in the District of Columbia?

DCAR is now accepting applications for six open, elected positions available on our 2022 DCAR Board of Directors. The DCAR board is a diverse group of talented individuals that guides the District of Columbia state association to serve in the best interest of its members.

As a member of the Board of Directors, you can help shape the direction of DCAR, be an influential voice for the association and advocate to protect and enhance the industry and your D.C. community.

There are six positions available on the 2022 board:

The District of Columbia is using an array of tools to meet the city’s housing affordability challenge – including inclusionary zoning (IZ), which has received a lot of attention during the past year. Several zoning cases, which have been proposed and adopted, have re-shaped IZ to help increase the District’s affordable housing production. There are already many questions out there about how IZ works—now with the upgrades, it’s key for REALTORS® to stay ahead of the curve.

Prior to joining DC’s Department of Housing and Community Development, Gene practiced real estate, municipal and corporate law for over 20 years in Chicago, London, DC and Singapore. He worked for small and large firms, including managing his own firm and represented individuals, small and large corporations and governments.

Gene received his law degree from The John Marshall Law School in Chicago after receiving his Bachelor of Science in Accountancy from the University of Illinois and passing the CPA exam.

On August 3, the D.C. Council held the final vote on the FY22 budget. The final step is passage of the Budget Support Act, the statutory piece of the budget, on Aug. 10. Key highlights include:

Along with other business organizations, DCAR advocated that the Council carefully review this increase before proceeding, as it was added in at the last minute. DCAR believes that more thought and consideration should be given to this topic, and that the Tax Revision Commission would be the appropriate venue.

DCAR and GCAAR members have asked what remedies are on the table. While Mayor Bowser, who is against the increase, cannot line-item veto the tax, she can use her mayoral veto on the entire budget. However, this is unlikely as the Council would plausibly override the veto.