Six of the seven candidates endorsed by the District of Columbia Association of REALTORS® are projected to win D.C.’s Democratic primary based on the June 21, 2022 election results.* DCAR supported the following candidates:

DCAR’s REALTOR® Party Action Committee (RPAC) Trustees thank those DCAR members who have invested in RPAC, which has enabled us to produce and distribute information in support of our endorsed candidates. As we approach the elections in November, DCAR will continue to engage with candidates whose agendas will ensure a better future for our members, our industry and for the District.

* PLEASE NOTE: Election results remain unofficial until the Board of Elections certifies the ballots.

WASHINGTON, D.C. – The District of Columbia Association of REALTORS® (DCAR) has endorsed Mayor Muriel Bowser (D) and Congresswoman Eleanor Holmes Norton (D) for re-election, Brian Schwalb for D.C. Attorney General, as well as four candidates who are competing in primaries for the D.C. Council’s June 21 election.

The selected candidates are: 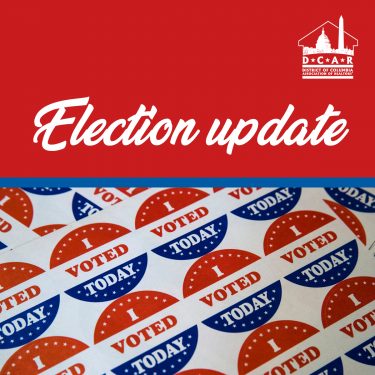 During the last four months, DCAR’s REALTOR® Party Action Committee (RPAC) Trustees have been interviewing candidates to understand their vision and priorities for Washington, D.C. The member-led committee met with 20 candidates vying to serve the community and was moved by the ideas the endorsed candidates shared.

This election is a watershed moment for the District. We are moving into an endemic phase of COVID-19, and we’re facing pivotal challenges as we emerge from the pandemic. The past two years deeply underscored housing’s fundamental necessity. Washington is one of the major epicenters of the housing affordability crisis; owning a home is becoming unobtainable for more and more District residents. Without a concentrated push to substantially increase housing supply, the American dream will continue to fade for many.

Additional details about each candidate can be found here.

This is the list of DCAR-endorsed candidates for the 2022 D.C. primary election. 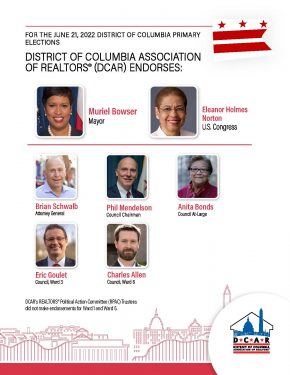 Campaign information from our DCAR-endorsed candidates